About 20 women sit in a circle on blue legless chairs placed over yoga mats in a white-walled classroom. In one corner, artsy cutouts of the words “joy,” “compassion” and “courage” are taped on the wall, while an overflowing arrangement of yellow and purple flowers decorates the opposite end of the room.

The shoe-less women know each other well and laugh at each other’s jokes. If it weren’t for the corrections officer looking out the door, this room could be a yoga studio in any hip neighborhood.

The women are inmates at the Homestead Correctional Institution, an all-women’s prison, and for three days they were immersed in a silent, meditative retreat. After the silence was declared over, the women couldn’t stop talking.

“There’s a lot I can’t control in prison, but this class gave me control,” said Catherine Lafleur, who is serving a life sentence for killing her husband in 1999. “Taking just one moment for breathing, it makes such a difference. It has made my life better.”

The retreat is part two of a breathing and meditation course called Prison Program. The International Association for Human Values, which organized the program, seeks to teach people in penal institutions a breathing technique called Sudarshan Kriya. The technique, created by Indian spiritual leader Sri Sri Ravi Shankar, is aimed at delivering relief from accumulated stress. (Shankar is not to be confused with the musician, Ravi Shankar, who gained fame through George Harrison.)

“I worked so hard on myself to find the courage to heal,” said Deidre Hunt, who was on death row for eight years and is serving a life sentence for murder.

Hunt said she was in solitary confinement for most of those eight years and wished she had known about the breathing technique at the time. It would have made it easier and quicker to heal, she said.

“If I do this every single day, it changes you,’’ she said. “After, you don’t recognize yourself. You think, ‘Why didn’t that upset me?”’

Meera Khan, who is in prison for welfare fraud, said she wants to open a yoga studio when she gets out. She said the practice could benefit not only people in prison, but those on the outside.

“This could discourage people from committing crimes,” she said. “Society needs the Prison Program”

During the retreat, the women silently did yoga and underwent guided meditation, stopping only for meals. There were no distractions. No TV, no radio, no reading. At night, the women slept in their cells. Some wore small signs on their shirts alerting others not to speak to them until Monday.

After the retreat was over, the women took turns recounting their experience and the impact meditation had on their lives: “Transformed.” “Peaceful.” “Calm.”

One inmate called her prison term a “blessing” because she discovered meditation there.

Whatever their background or their crimes, the participants agreed the meditation and silent retreat led them to discard and defuse their anger.

Gabriella Savelli is program director and an avid practitioner of meditation. “People have their hearts and minds shift,” she said, her voice breaking. “To see people feel love again in a way that they want to contribute to the world — it’s real, they’re not faking it.”

The program has been running at the Homestead prison since 2013, with more than 130 women going through Level One.

Savelli, who lives in Washington, often leads the classes. When she’s not there, local volunteers guide meditations and visit to motivate the inmates.

Prison warden Marie Boan said in a written statement she instituted the program because she believed it would help the inmates reduce their stress.

“The program has been wonderfully beneficial to those who participate, allowing them to learn the value of patience and alternate means, instead of lashing out toward each other when stress rises,” she wrote.

Since 1992, Prison Program has taught meditative practices to more than 10,000 inmates, correctional officers, law enforcement staff and crime victims. Twenty three prisons around the country have instituted the program’s Level One, which introduces the practice in two- to three-hour courses several times a week. Homestead Correctional is only the second prison in the country to have completed the silent retreat.

Savelli said the silent retreat offers greater benefits than Level One, and she hopes more prisons will adopt the program.

“The amount of release and clarity you get with the intensity of a weekend like this is a lot faster than waiting for things to dawn on you,” she said.

“When you’re in state of non-agitation, you have a certain clarity and a state of calmness that allows you to see what’s not working for you,” she said. “It’s not to say you get done with this and you levitate to the clouds, but you just have an ability to shift that comes over time when you cultivate wisdom.” 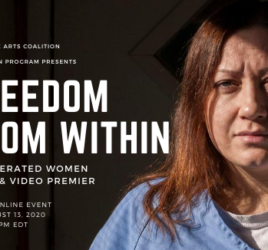