WASHINGTON, DC — (August 16, 2017) – With reports of 20 veterans taking their own lives everyday, the news of a holistic breathing meditation that is effective in relieving symptoms of PTSD and stress, is literally a sigh of relief. Almost 2,000 service members and veterans have found relief from PTSD and stress, through the SKY Breathing Meditation, offered to veterans at no cost, through Project Welcome Home Troops (PWHT).

On August 24-27, Project Welcome Home Troops will host its first ever retreat for almost 100 graduates of the SKY Breathing Meditation workshop, at the Art of Living Retreat Center, in Boone, North Carolina.

“The goal of our this retreat is to build on the skills and techniques learned, which strengthen emotional and social resilience and lead to optimum performance. The social and community component of Project Welcome Home Troops (PWHT) builds strong bonds and paves the way for a more positive reintegration experience for veterans and their families,” said Leslye Moore, National Director for Project Welcome Home Troops.

Despite advances in traditional therapy and drug-based treatments, a recent study shows that only 50% of patients who complete such treatments recover. Dr. Peter Bayley, who is leading a clinical trial at the Palo Alto VA Center, to examine the effects of the SKY meditation therapy on Veterans with clinically significant PTSD symptoms, points out, that “Despite promising findings, meditation has not been sufficiently studied in Veterans to recommend its widespread use in treating PTSD.”

Meanwhile, a research team at the University of Wisconsin-Madison, studied SKY Breathing Meditation (also known as SKY), because of its focus on manipulating the breath, and how that in turn may have consequences for the autonomic nervous system and specifically, hyper arousal. Within just one week, the vets who received a week long training in the SKY breathing technique already showed lower anxiety, reduced respiration rates and fewer PTSD symptoms.

Looking forward to the retreat is Colonel Joel Aoki, a 25-year Aviation Officer with the US Army. After having been deployed numerous times, Colonel Aoki witnessed many tragedies, including the loss of many friends but was overwhelmed after one particular incident, which he says, “broke him.” Over the months that followed, Colonel Aoki experienced the intense grief, sadness, and regret associated with “survivor’s guilt.”  Like many of his fellow service members who return from combat, he attempted to halt the negative emotions with alcohol and intense physical activity. It wasn’t an effective solution, and when the feelings persisted, he began isolating himself from his family. Following a team-building program, took the PWHT workshop and learned the SKY Breathing Meditation. Three weeks later, on the death anniversary of the men he’d lost in that tragic incident, instead of his usual pattern, he chose to honor his guys with the breathing practice.

Colonel Aoki says he didn’t expect what happened next. “Normally on that day, I feel a lot of grief, guilt, and regret, but this time, when I finished the SKY Breathing Meditation, I felt a sense of peace; I was actually happy, ” he said. ” Instead of focusing on the past and all the mistakes, it was more like a wake where I was celebrating the wonderful people who the guys were, and the bonds we had with one another. In that moment, for the first time, I was honoring them the way they would have wanted.”

Project Welcome Home Troops is a program under the International Association for Human Values, a 501(c)(3), in the USA, was created in 1997 by Sri Sri Ravi Shankar, as a global platform to solve society’s most pressing issues, by uplifting human values.  The Project Welcome Home  Workshop addresses the most pressing issues facing service members and veterans today. It was created in 2006 and has reached almost 2,000 people. The cornerstone of the program is the researched and evidence-based SKY Breathing Meditation, a scientifically backed technique rooted in the yogic science, which is shown to give relief from chronic and traumatic stress.

About The Art of Living Retreat Center:

Seated high in the majestic Blue Ridge Mountains of North Carolina, the Art of Living Retreat Center and Ayurvedic Spa provides a beautiful, inviting place for all people to deepen their spiritual practice. Founded by the renowned humanitarian leader and spiritual teacher Sri Sri Ravi Shankar, the center offers Art of Living courses and hosts programs taught by other spiritual leaders and organizations from around the world. With breathtaking natural beauty, knowledgeable staff and harmonious architecture, the center offers a wondrous opportunity to nurture your body, mind and spirit — and to discover the joy of life.

Kushal Choksi on behalf of IAHV 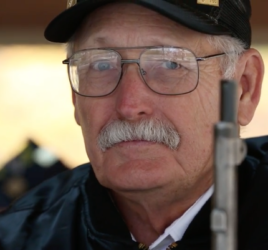 NEW HOPE AND PEACE FOR VETERANS WITH PTSD 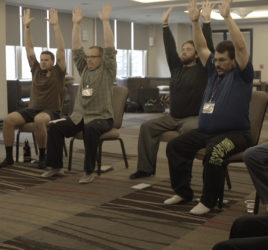